Filestar is the ultimate Portable Network Graphic converter and can convert .png images to 182 other formats. 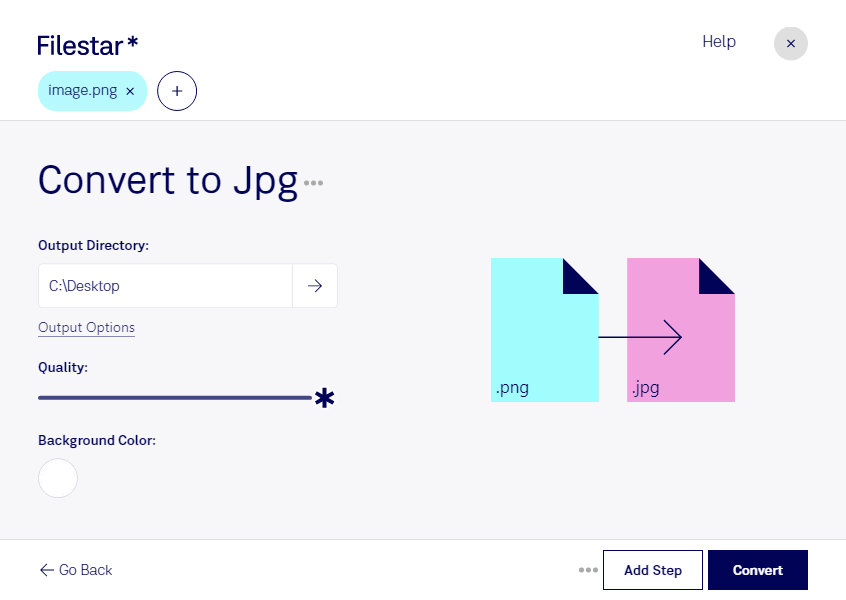 Description
A PNG file is an image file stored in the Portable Network Graphic (PNG) format. It contains a bitmap of indexed colors and uses lossless compression, similar to a .GIF file but without copyright limitations. PNG files are commonly used to store graphics for web images.

The motivation for creating this file format was the realization that the Lempel-Ziv-Welch (LZW) data compression algorithm used in GIF format was made patent by Unisys. Other problems with the GIF file format, such as its limit of 256 colors as computers with far more advanced displays were increasing, made the replacement desirable.

PNG supports palette-based images (with palettes of 24-bit RGB or 32-bit RGBA colors), grayscale images (with or without an alpha channel for transparency), and a full-color non-palette-based RGB or RGBA images.

It was specially designed for transferring images online and not for professional-quality print graphics. Therefore, a non-RGB color space such as CMYK is not supported.

They use the .png file extension and are assigned MIME media type image/png. It was published as Informational RFC 2083 in March 1997 and became an ISO/IEC standard in 2004.

Although GIF allows for animation, PNG is a single file format. In 2001, the PNG working group published the Multiple-image Network Graphics (MNG) with support for animation. It achieved moderate application support, but not enough among mainstream web browsers and no usage among website designers and publishers.

In 2008, Mozilla developers published Animated Portable Network Graphics (APNG) format, which is natively supported by Gecko- and Presto-based web browsers. However, as of 2017, APNG remains minimally used despite being supported by all major browsers but Microsoft Edge.

How to add watermark to multiple images

September 28, 2020
Ever wondered how you can add batch watermark to hundreds or thousands of images at a go? Look no more, we got you covered!

How to use the AVIF Format

September 25, 2020
The AVIF format is the new kid on the block and she's doing so much better than the existing giants. If you want to know more about this new format and how to use it, read on!

All about the CR2 file format